The Wreck of the Edmund Fitzgerald

Vocabulary Explore more words on Tim McCall's web site.
gale  (noun)   a very strong wind; 32-63 m.p.h. in meteorology (weather).  This equals the force of a small tornado that blows off a chimney or uproots a tree.
flagship (noun)   the lead ship in a fleet, or the largest ship in a group
well-seasoned (adjective)   experienced, skilled
list (verb)  to lean to one side
sailing blind  is a metaphor for sailing without guidance.  "Sailing blind" means not being able to see through the storm.   It could also mean having no maps, GPS, radio communication, or any help.
"We are holding our own," said Captain McSorley.  This means to go on despite difficulties.
teeth of the storm is a metaphor for the most violent part of the storm
capsized  (verb)  to overturn in water
squall (noun)   a sudden violent gust of wind, especially one bringing rain, snow, or sleet

2.  After researching, describe your theory of how the Fitzgerald sank to a friend.  What do they think?

3.  How would you feel if your dad was one of the sailors who went down on the Fitzgerald?  This is called empathy, or feeling what the other person feels.

4.  Which phrase or verse of Gordon Lightfoot's song captures your imagination?

5.  Savage unpredictable waves are also known as rogue waves.  They are also called killer waves, freak waves, and monster waves.  They may occur in oceans or lakes. A phenomenon known as the "Three Sisters" is said to occur in Lake Superior when a series of three large waves forms. The second wave hits the ship's deck before the first wave clears. The third incoming wave adds to the two accumulated backwashes and suddenly overloads the ship deck with tons of water. The phenomenon was a possibility in the sinking of the SS Edmund Fitzgerald on Lake Superior in November 1975. (source: Wikipedia)

HELP  Help Miss Peterson plan for next year.
What helped you learn?  Check all activities and resources that helped you understand this ballad.
Go to this Google form and fill it out.

Wild Rice and the Ojibwe people
Wild Rice recipe
This is the recipe for the wild rice hotdish that you tasted in music class.  The rice was harvested by the Ojibwe band at Leech Lake, Minnesota.   "Gitchi Gumi" was the Ojibwe name for Lake Superior in our ballad, The Wreck of the Edmund Fitzgerald. 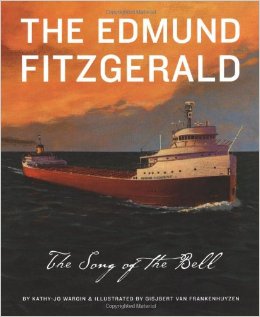